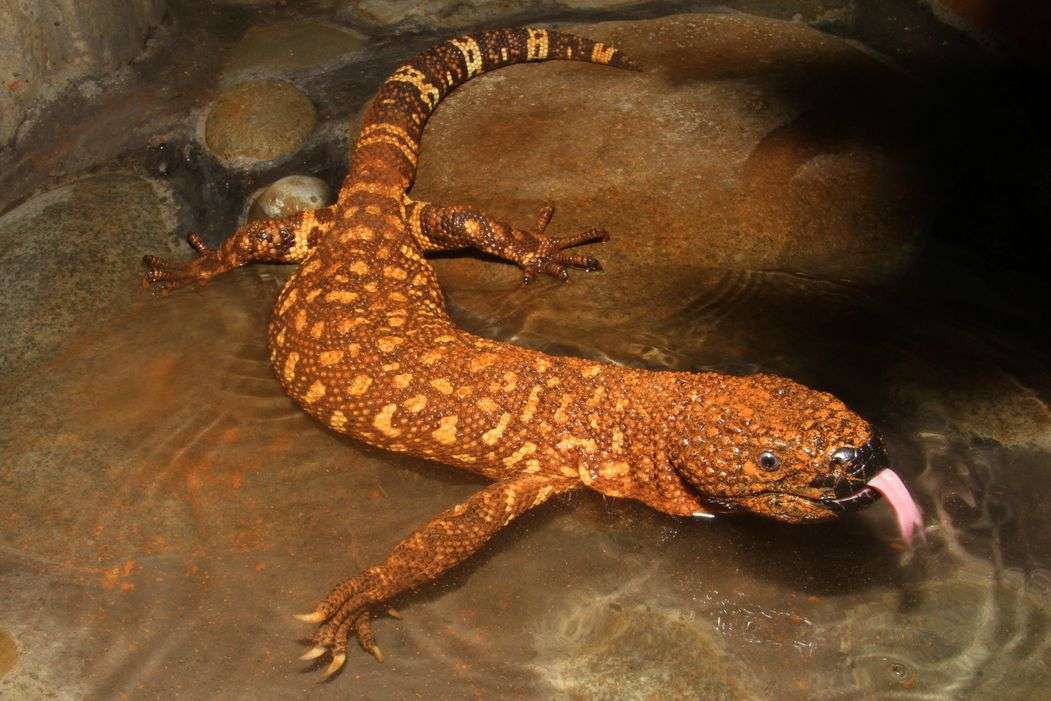 The beaded lizards and Gila monsters from the genus Heloderma are the only lizards in the Americas capable delivering a venomous bite.

They have venom glands in their lower jaws, not like venomous snakes where they are located in the upper mandible. The lizards have to chew in the flesh of their victims to deliver their venom, unlike snakes where the venom is injected quickly. Therefor they act like little ‘pit-bulls’ holding on firmly so enough venom can run into the victims’ wounds. The venom is not lethal but the pain is excruciating, it also provokes a rapid drop in blood pressure. It seems to be more for defensive purposes instead of a hunting tool.
These reptiles are slow in their movements which makes them vulnerable for predators like coyotes and raptors. This also might explain their bright warning colors. Most of their time they spend in burrows, avoiding the heat of the day, being more active in the early mornings or late afternoon. In nature they primarily feed on bird and reptile eggs. They also consume small rodents, birds, frogs, lizards and even carrion. They store a fat reserve in their tail. In Reptilandia we give our beaded lizards (Heloderma exasperatum) small rats mice and sometimes a chicken egg. Gila monsters (Heloderma suspectum) occur more in the dryer deserts and scrub lands like in Arizona in the United States and Sonora in Mexico. Several species of beaded lizards occur in the tropical dry forests of Mexico and Guatemala. They grow larger than Gila monsters, up to 90 centimeters, with the males slightly larger than the females. We have been breeding these egg-laying beauties with success in our park, and we are currently waiting on another six eggs to hatch!

END_OF_DOCUMENT_TOKEN_TO_BE_REPLACED

Mysterious beings From time immemorial, the Boruca tribe has practiced ceremonies and rituals dedicated to the gods of nature. With the arrival of the spanish invaders, our ancestral villages lost many customs and rituals. Out […]