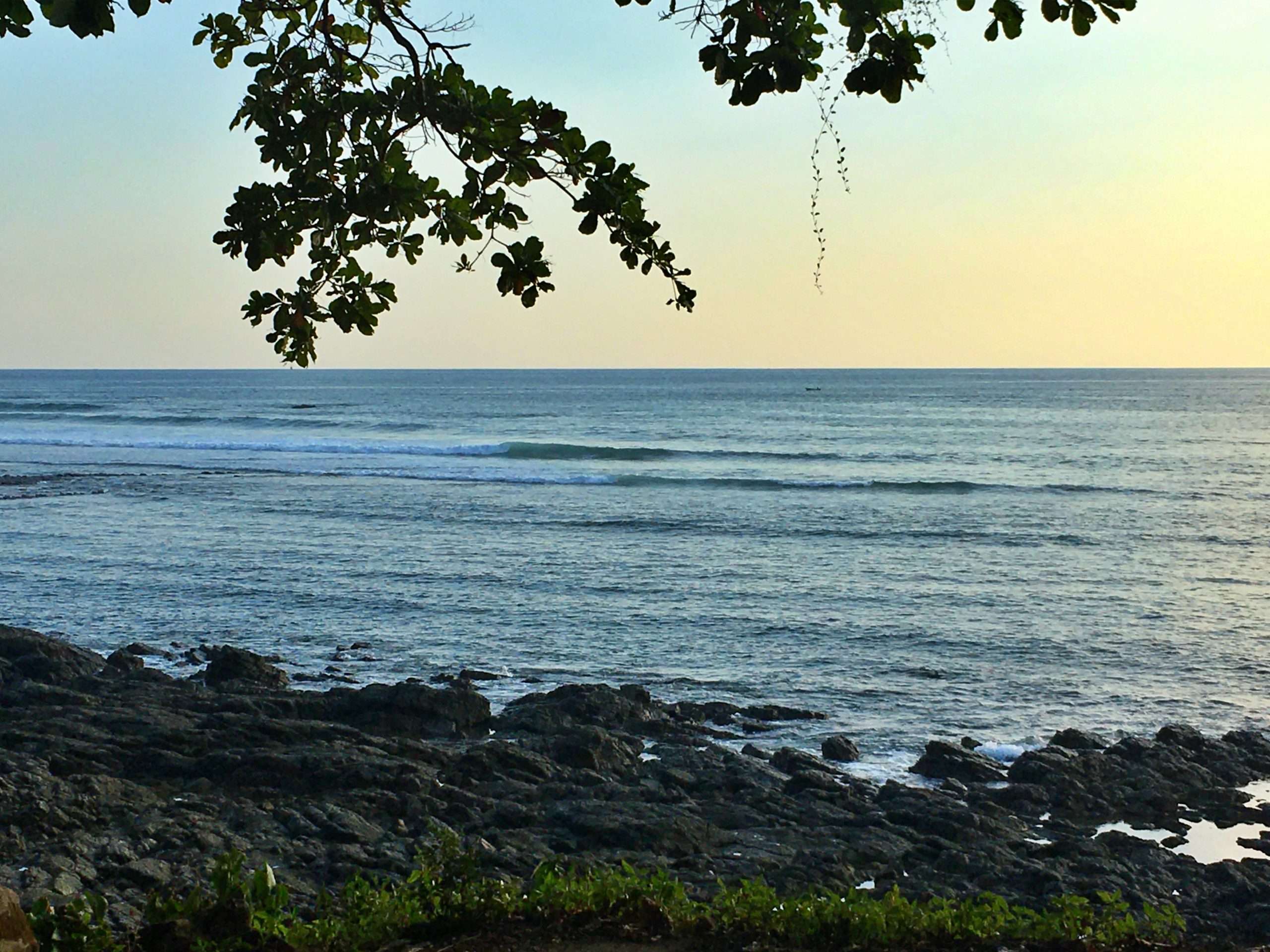 Why You Should Not Surf Alone – Part 2

This story is another example of why a surfer should not surf alone. It was March 9th, my friend Sara’s birthday. She wanted to go surfing so I picked her up and we checked some spots. Dominical was too big and dumpy. Dominicalito was too small and inconsistent. We didn’t want to drive too far as it was later in the afternoon, so I thought maybe the Point would be good.

We got there, and it looked great for what we were looking for – empty 2 to 4-foot waves peeling down the underwater rock shelf with plenty of time between sets to safety get in and out. It was two hours before low tide. The paddle out over the rocks was leisurely, and the sun reached the angle towards the horizon where everything turned to gold, pink, and emerald. We were grinning ear to ear at our fortune.

The two of us traded waves for an hour. I remember sitting farther out and after riding a wave testing the depth by touching the bottom. At the time I tried it, the depth was about four feet. Since I have surfed the spot for twenty years, I felt safe enough to drop in and make an exit before it got too shallow. What I did not anticipate was how much the tide would drop in that one hour. 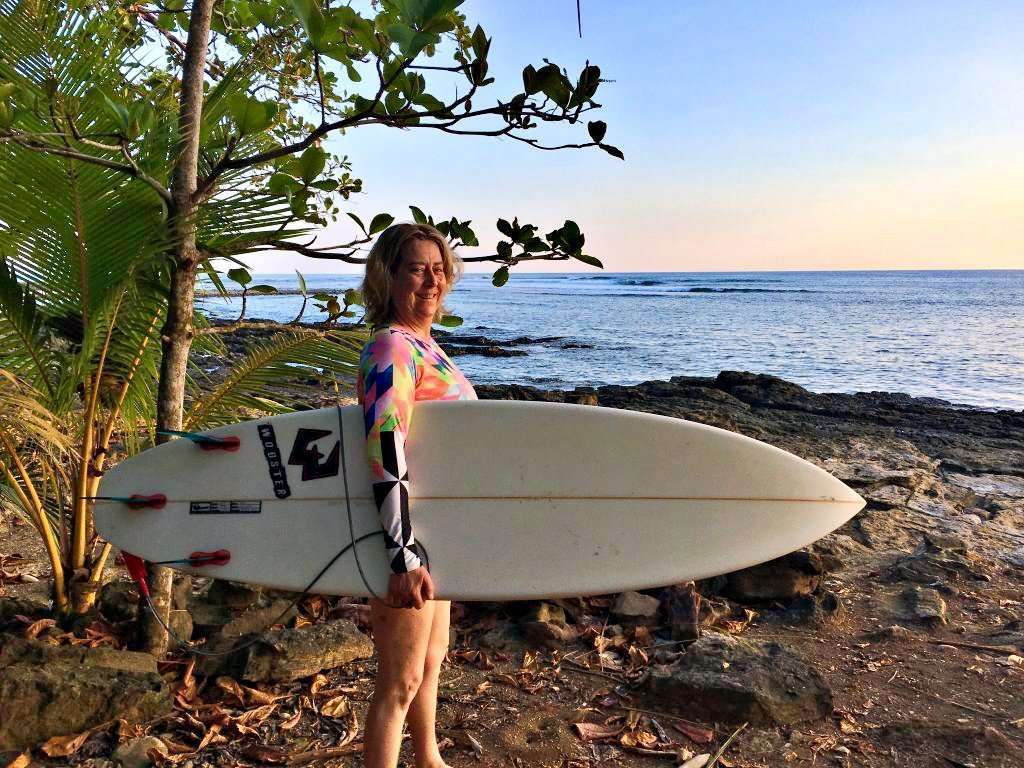 It dropped about two feet. The sun was setting, and I was almost ready to paddle in. I caught a wave, did a turn, and jumped off my board feet first. The white water captured my board and pulled me toward the shallow rock shelf on the inside. I started to push myself back, and when I kicked my legs out, they smacked into one of the rocks. In an instant, my right knee and left foot were split open.

I reached down to my knee to feel how bad it was, and I felt the bone. I felt nauseous and I still had to get in. Sara was oblivious to what happened and was sitting on the outside, waiting for a wave. I whistled and waved to her that I was heading in. I rode in as far as possible on my belly in the whitewater and then paddled the last 50 yards to the dry rocks.

The goal was to get to the truck. My adrenaline had kicked in, and through a lot of pain and luck, I was able to climb up the rocks without slipping or dropping my board. I pulled a big jug of water from the back seat and poured it over both cuts, knowing how quickly an infection could set in. Then I took my towel and pressed hard over my knee, attempting to staunch the bleeding. My foot was throbbing, but there was less blood.

About ten minutes later, Sara paddled in and immediately saw something is wrong. I looked like I was going into shock, so she jumped into the driver’s seat and started towards the hospital. We decided on Quepos since my house was on the way, we could drop off the surfboards, get my passport, and she could get a change of clothes.

During the 45 minute drive, Sara kept me talking so I wouldn’t pass out. We pulled up at the curb for Emergency drop-offs, and a hospital worker brought out a wheelchair for me to use. It took about 30 minutes to be seen by a doctor, who recommended an x-ray and stitches. They put me on an IV drip with enough codeine to dull the pain, and then we waited.

Sara and I kept each other entertained with stories and jokes, but the mood was somber in the emergency ward. In one of the treatment rooms, an older woman took her last breaths. Family members were coming and going, holding hands with tears in their eyes. We felt out of place – salty, barefoot, and still in our surf trunks and t-shirts.

After another 30 minutes, I was led to the x-ray room and was embarrassed to be still bleeding from my foot right on the table. It felt unsanitary, but the nurse told me not to worry and that it would be cleaned right afterward. The doctors had not seen any fractures. 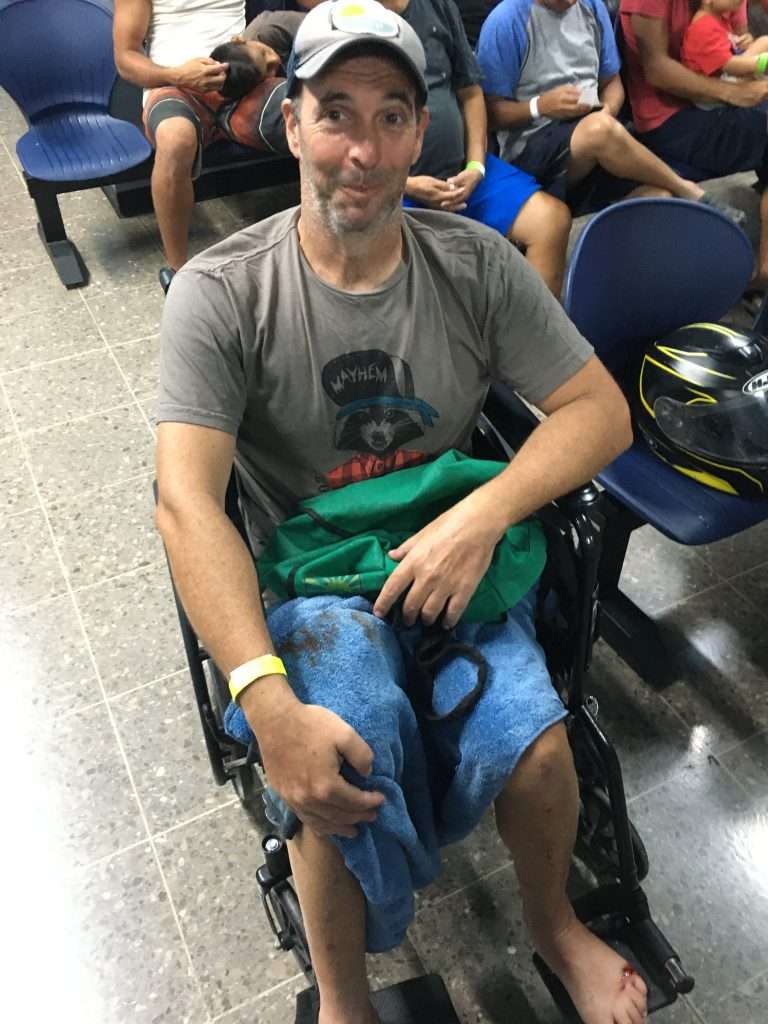 I laid on the table, and the doctor shot some novocaine into my knee and foot. Once I could no longer feel anything in those areas, a nurse proceeded to scrub each wound until it appeared clean. Then it took the doctor eleven stitches to close up my knee and another five for my foot. He wrapped them tightly in gauze, gave me instructions on caring for the injury, and wrote up a prescription for antibiotics and some aspirin.

Sara drove my truck back to my house and helped me get up the stairs and inside. It was 11:30 p.m. I was so thankful for her help, especially since that day was her birthday. She said it was definitely one to remember. I felt so lucky that she was out there surfing with me, or I would not have made it to the hospital so easily. The Point has terrible cell phone coverage, and an ambulance would have taken more than an hour to get there if they even could find it in the dark.

Let this story be a lesson for anyone surfing. Do not surf alone. Take a surf buddy with you, and both of you will be safer.

The Alma De Ojochal Hotel is, as the name says, “the soul of Ojochal” and is in tune with the spirit of Pura Vida on the South Western coast of Costa Rica. Here you will have the feeling of enjoying life to the fullest, embracing experience and adventure in a very relaxed atmosphere.

What a beautiful spot. You will now understand why people love this secluded beach, surrounded by lush rainforest and lined with palm trees. It mostly has calm waves. The shallow waters are safe for children (always under their parents’ observation and paying attention to the lifeguards’ alerts.) 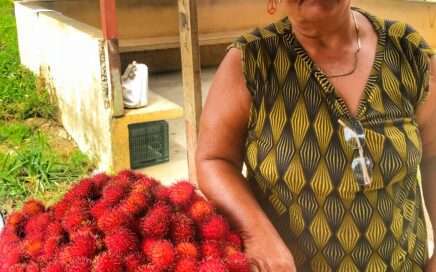 How YOU can help the local economy

Indeed, most of the Costa Ballena region is dependent on tourism. Given that as the background, we hear from our homeowners, clients, and the social media channels: What can we do to help with the local economy? 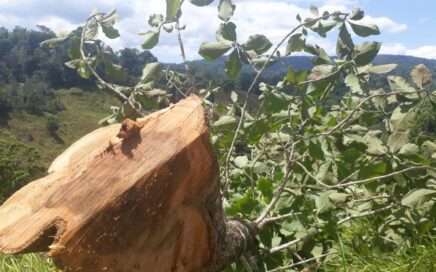 Where does your native timber come from?

Most of the construction on the Costa Ballena and Osa Peninsula is done by hotels and second-home builders drawn by the lush rainforest. Native timber feels like an obvious choice: who doesn’t love a handcrafted Cristobal door’s luxury? 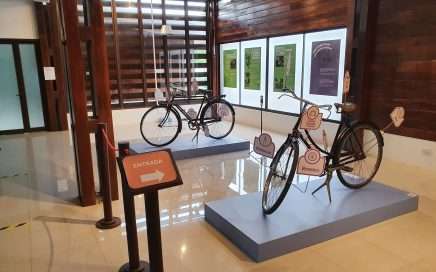 In Osa the history travels by bicycle

It is an exhibition with identity, designed by and for the inhabitants of the Osa Canton. It is a temporary exhibition “In Osa history travels by bicycle,” which you can admire at the Finca 6 Museum site, in Palmar Sur. 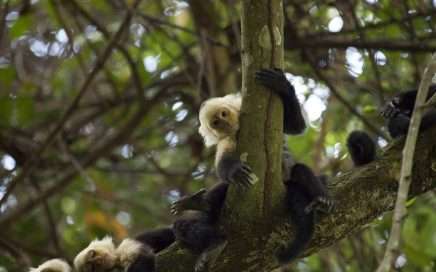 The Strange Behavior of a Gang of Teenage Monkeys

The whole gang of teenage monkeys turned tail, ran for the fig tree, scuffled for a position, and ascended to the crown. Once safe from the mother raccoon, they seemed to lose interest in her, like a person trying to forget an embarrassing incident and pretending it never happened. The monkeys returned to their vagrant behavior, and mama continued about her business with her cubs at her side. 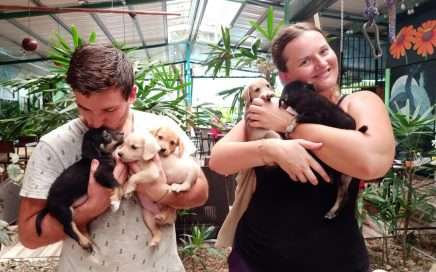 DAWG is a Dog and Cat Rescue Organization, provided food, a medicated shampoo, vet care, a crate and a puppy pen.

Another week went by, and another puppy showed up at the property beside the hotel, so then there were five puppies!!!

END_OF_DOCUMENT_TOKEN_TO_BE_REPLACED

Most probably, you have seen a creature crossing a stream with high speed on his hind legs. This runner is a basilisk, also called Jesus Christ lizard. Basilisks can do this because of their large feet and specialized flattened toe fringes. These fold out when the foot presses down on the water surface.