Less than 50 years ago, Bahía Uvita was an isolated area difficult to access.

Its history is linked to Mr. Cai Cruz and the aluminum producer Alcoa. In 1962, Cai Cruz owned Hacienda Bahía with extensive cattle farming, and La Casona, the family´s mansion. When Cai Cruz, a pilot, died in a plane crash, the state banks took control of Hacienda Bahía. During the 70s, ALCOA, one of thr world´s leading aluminum producer, bought the hacienda to build a port at Punta Uvita to export bauxite.

It was when doña Elba Montero Marín, from San Isidro, moved with her parents to Punta Uvita, following medical advice for her father; the benign sea air would alleviate his ailments. Don Héctor took over La Pachanga, the "comisariato", then located where the entrance to the Marine Ballena National Park is now.

During the 80s, the hacienda was invaded by more than 90 families.

The IDA (Institute of Agrarian Development) bought and parceled out the land, which led to the community we call today Uvita, Bahía Ballena. Then, the land was distributed, and hundreds of people from all over Costa Rica came to live here… happily ever after? There was no school, no church, no bridge, and no roads.

Elba saw the need and made her best effort to achieve consent among the settlers. She proudly mentions that she has contributed with her “grain of sand” to the construction of the Flor de Bahía School, the Virgen del Carmen (Our Lady of El Carmen) Catholic Church, and the town´s roads. 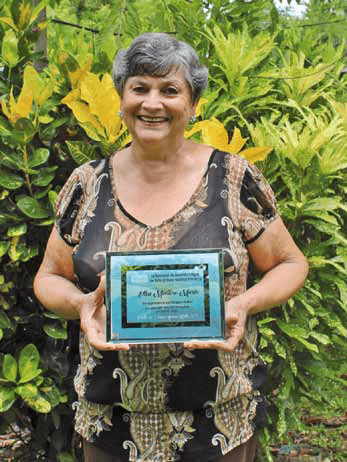 In April, during the Summer Festival at Bahía Ballena, a homage was paid to doña Elba for her ongoing cooperation with the town.

She is grateful to the community for trusting her, and remembers with joy that at Christmas she used to give a recognition to the children when fun activities were scarce.